People from across Leigh Pastoral Area joined together to journey on a pilgrimage to the Holy Land in this Year of Mercy.... 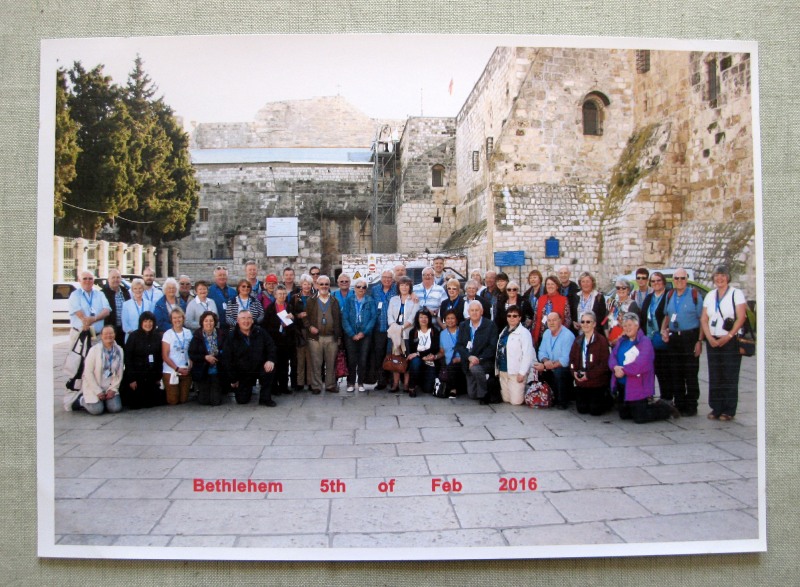 The day started early for people anticipating a busy journey on the M60. Surprisingly, the motorway was smooth flowing for once and all arrived at Manchester Airport with time to spare.

The Airport itself had an atmosphere of relative peace and calm, only punctuated by the occasional conversation of a mobile businessman.

Our flight was accompanied by Gogglebox stars, Jewish mamas and their families and hard-working easyJet crew members.

Tel Aviv airport passport control queues were quickly alleviated by the timely opening of more lanes and the speedy processing of our party by the query, "Are you part of a group?" Having gathered our bags and assembled together we stepped out of the airport into the Israeli dusk.....

The air is cool with a faint scent of lemon as we cross the concourse to our coach, mystifyingly decorated with waving palms and the word 'Hawaii'. We have our bags loaded and eagerly board the bus to begin the second part of our journey.

Cars and lorries flash by on the free flowing roads, our journey puctuated by the commentary of our guide, Usama, as he explains the mysteries and complexities of the society and politics of this country. We pass the lights of hill towns with glimpses of names on road signs familiar from the Gospel readings yet here, now, a reality; Jerusalem, Nazareth, Kanna.

A growing awareness of darkness looming ahead, bordered with groupings of lights - the Sea of Galilee.

A manoeuvring through streets brings us to the lakeside and our hotel, where we are warmly welcomed with a refreshing drink, quickly followed by a generous meal.

Later - a silent grey shape glides past my window. A sense of the expanse of water beyond the roadside. Two layers of lights outlining the plateau above and the lakeside below. On the lake, the red lights of a fisherman's boat. Within - a questioning......., a tentative thought......... mixed feelings in anticipation of the days to come.