A jolt from gentle slumberings as the phone rings - my wake up call.

I pull back the curtains, as the kettle boils, to stunned stillness - sunrise over the Sea of Galilee. Distant hills throw off their cloak of darkness in the growing light as the sky reddens above them, the water a still pale sheet. Sliding open the window, I hear the cry of gulls as they flock over the water, the 'kee' of an unidentified bird. A skein of geese beat their wings in unison as they fly to their feeding grounds. A cock crows... 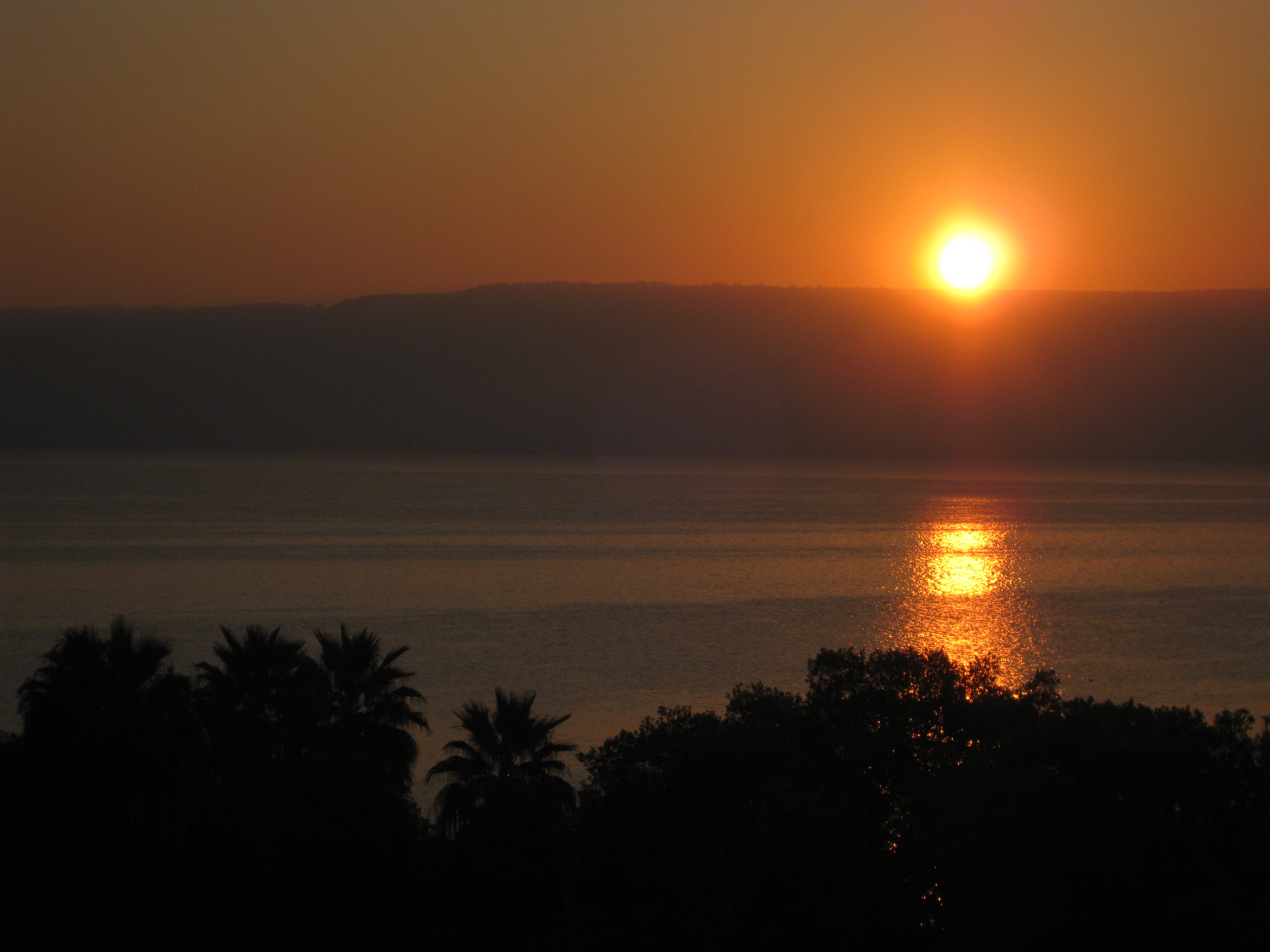 Later, we board our boat, 'Shimon'. I smile to myself as the 'Stars and Stripes' is swiftly exchanged for the 'Union Jack'. We take in the scenery about us, the surrounding hills sharp in the clear air, surprisingly green with vegetation. Sunlight glints on the calm water. We watch as our priests vest for mass. A deep peace and stillness settles over the vessel as we celebrate the Feast of the Presentation. A flock of sparrows join us, initially lining up along the sun canopy, then, comfortable in the stillness of the moment, fly down during the Consecration to potter amongst us.

The time for Communion arrives. I have been asked to be a minister. The significance of what I am doing here, in this place, hits me. I look into the faces of my fellow pilgrims as I offer them the Blood of Jesus and wonder if they feel as I do as they drink from the chalice. Eyes of faith look back at me.

We sing 'Dear Lord and Father of Mankind', a hymn I have always liked, but now the words take on a new meaning. During the third verse I suddenly realise - I am looking at the hills above Galilee - Jesus looked at these hills too - he was here two thousand years ago - on this lake - and saw something very similar to what I am now seeing. I am overwhelmed. My voice falters, the words blur before my tear filled eyes.... 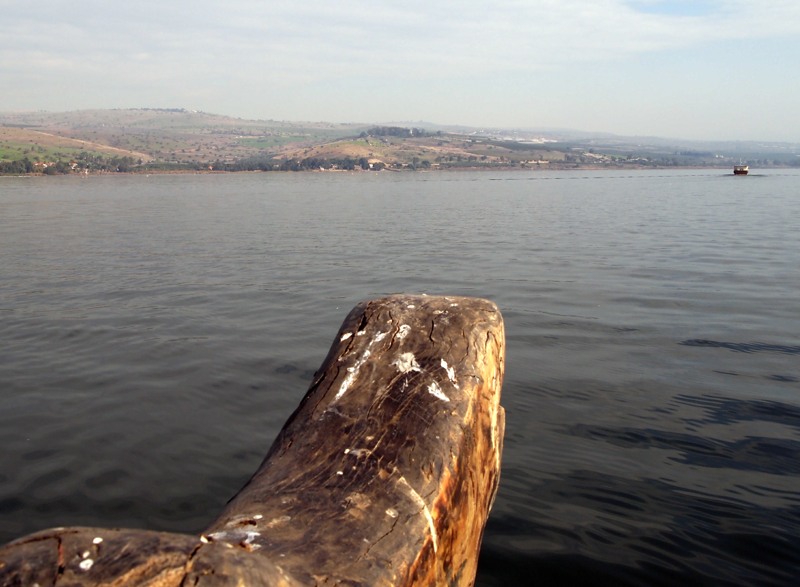 After our celebration, a crew member casts his net into the water. The fish aren't rising today, or maybe he's just fishing on the wrong side of the boat, as gulls flock on the surface a short distance away on the starboard side. Another crew member teaches a dance within the confines of the deck area. It feels a good way to express our joy.

We return to shore and the Visitor Centre where the remains of a 2000 year old boat are displayed. It could have belonged to anyone, but it makes me think - this would be a type of boat very familiar to Jesus and quite possibly identical to that used by St Peter.

Back on the coach for our journey to the Church of the Beatitudes, we ponder our experiences.

The Church of the Beatitudes is located above the traditional site of the Sermon of the Mount overlooking the Sea of Galilee. It was built by Antonio Barluzzi, is octagonal in shape and is maintained by the Franciscans. As I enter the grounds of the church I am struck by the immense variety of plants and trees in this lush setting. The call of parakeets and sparrows fills the air as they feed on the insect life around the plants. We view the site of the Sermon on the Mount and are told how Jesus could have spoken to so many people at once. There is a dip in the land behind the cliff face, forming a natural amphitheatre. Someone standing at the top of the dip could easily project his voice so that all sitting in front of him could hear what was being said. Research has also discovered that a cove close by has similar acoustic properties, whereby someone standing in a boat just off-shore could address a large crowd gathered on the hill side and all would be able to hear what was being said clearly. 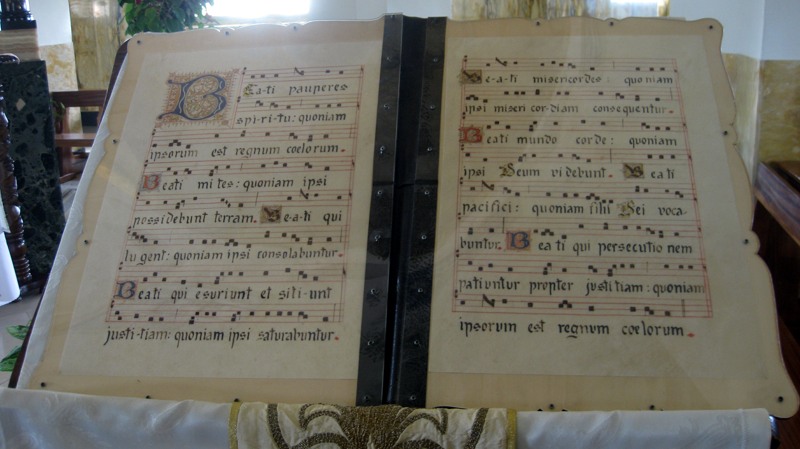 The interior of the black basalt church is cool and light. A golden dome is above the altar. Lower down, each of the Beatitudes is displayed in stained glass. 'Beati Pacifici Quoniam Filii Dei Vocabuntur' - 'Blessed are the peacemakers for they shall be called sons of God' - I think of the challenges this land faces, the intolerance of the extremists, the sufferings of those persecuted. I pray that one day peace may come and the people of this stricken country learn to live together amicably.

Church of the Beatitudes Gallery

On the coach we wind back down the hillside to Tabgha, a name which means 'Seven Springs'. It is in this area that the Multiplication of the Loaves and Fishes took place. In 1932 archaeologists discovered the ruins of an ancient church dating back to around 480AD. The mosaics were largely intact and these displayed Christian symbols. Within the current church and beneath the altar lies a large rock upon which it is said that Jesus divided the loaves and fishes for the people. Just in front of the altar is a restored mosaic of loaves and fishes. Sadly, some of the exterior of the building and its surroundings have been damaged by arson attacks. It seems this is a regular occurrence at many shrines. 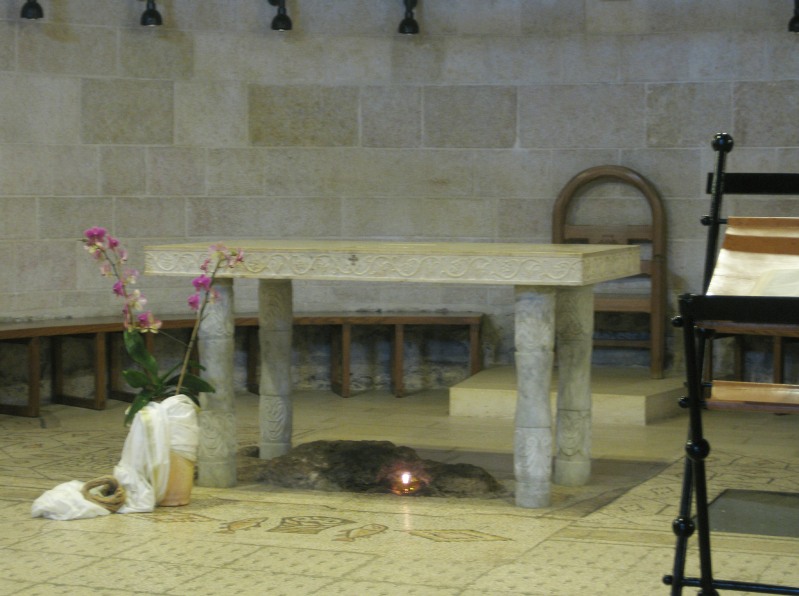 Our journey continues down to the lake shore. A stony beach lies before us, gently lapped by waves. Behind us, a small, black basalt chapel stands on rock foundations. To our right is a statue representing Jesus's words to Peter: 'Peter, do you love me?' This is the Primacy of Peter. We are told that the large rock upon which the church is built is likely to be the rock that Jesus stood on towards the end of his time on earth when he called to the Apostles to cast their nets on the other side of the boat. It would make a good view point for a watcher on the shore. I clamber around the rock wondering if Jesus had also climbed here.... 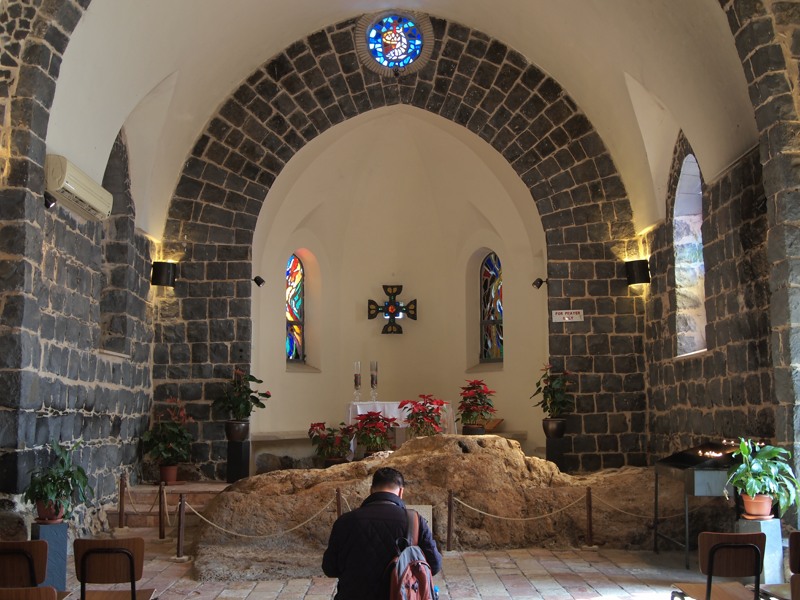 Inside the church, sunlight streams through stained glass windows illuminating the interior. The top of a large rock is exposed; bright colours from the refracted light touch its surface. In front of it is a Latin inscription, 'Mensa Christi' - the table of Christ. I place my palm on it, asking the Lord 'Did you stand just here, where my hand is?' The church is peaceful. I pray.....

Moving on to Capernaum, we pass a cave in the hillside which lies just below the area of the Sermon on the Mount. Maybe it also provided a place of shelter for Jesus and his disciples. 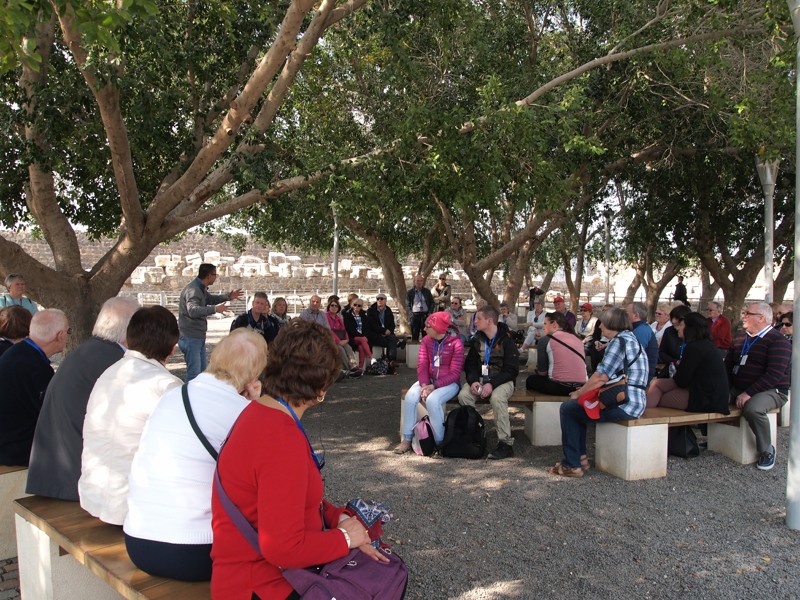 In the welcome shade of a grove of trees we listen to the Gospel story of the healing of Peter's mother-in-law, before exploring the ruins of this ancient place.

The town of Capernaum is strategically placed close to a crossing place on the Jordan River. It was clearly an important location in Jesus's time, as evidenced by the number of dwellings archaeologists have uncovered, dating back to the 4th c A.D., but overlying earlier Roman remains. The ruined synagogue dominates the remains of the town now, a different building from that of the 1st Century A.D., but located on the original site where Jesus explained the Scriptures to the people. It was this town which Jesus used as a base for his ministry in Galilee and the location of many of his miracles. It is also the place where the house of Peter's mother in law is located. The flying saucer shaped 20th century Christian church was erected over the site of an earlier church built by 4th or 5th century Christians who recognised it as a sacred site. A glass floor in the new church allows us to peer down through the ages to the layout of a 1st century building, the walls of which were inscribed with crosses and ancient graffiti, as evidenced by Eteria (or Egeria), a pilgrim nun, in the 4th century.

Usama asks us to consider how it is that the son of a carpenter had, and still has, such an influence on people. He talks about the Authority of Jesus and his absolute trust and faith in God. I think of my own trust in God - sadly lacking at times............

We return to the bus for the journey to Cana (or Kanna as it is now spelt) and our lunch stop. 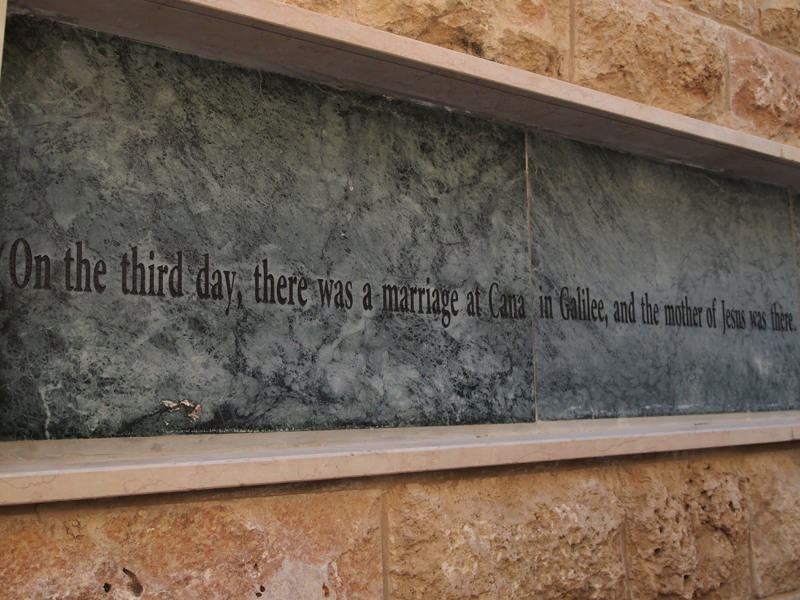 Usama, our guide, explains to us that weddings in this country were, and still are to some extent, long lasting events to which many people were invited. They could continue for two weeks at a time. In the context of the Wedding Feast at Cana then, it's not surprising that they ran out of wine, nor is it difficult to imagine the embarrassment of the host!

The Franciscan church in Cana consists of two parts, the upper part is a domed chapel used for mass and services, whilst the lower part consists of a small museum of artefacts from the site and then a small chapel. It is in this chapel that several of our married couples renew their wedding vows, whilst others review theirs!

I listen as St Paul's letter to the Corinthians is read to us. I recall my own wedding day, when the same reading was used - the impact of the words has not lessened. I think how good it would be to share my experiences with my other half.

After the service we are taken to Daniel's wine shop where we are given a small glass of Canaan wine. Some of us buy a bottle - it's too sweet for my taste though.

Leaving Cana, we return to Tiberias and our hotel where we hurry to get ready for dinner.